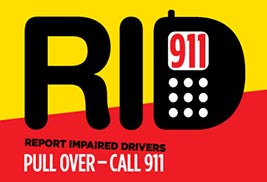 Regina motorists are helping to RID the streets of impaired drivers by using the recently introduced RID (Report Impaired Drivers) program.  Through this program, introduced in Regina on September 8, 2010, anyone who sees a suspected impaired driver is encouraged to pull over and call 9-1-1 to report to police.  While there is no guarantee that police will be immediately available to apprehend the suspect driver, the RID program does aid enforcement efforts and helps to raise awareness of the problem of drinking and driving.

From September 8th to October 31st, the Regina Police Service has taken 331 RID calls, which resulted in 114 RID letters being sent to registered owners of reported vehicles.  (Please see the attached sample letter.)  There have also been 12 instances where drivers were intercepted by police and charged.

The Regina Police Service commends drivers who obey the law and help keep roadways safe for all users.  The Report Impaired Drivers (RID) program is a partnership between Police, Saskatchewan Government Insurance (SGI) and the Saskatchewan Liquor and Gaming Authority (SLGA), with support from Mothers Against Drunk Driving (MADD), Students Against Drinking and Driving (SADD) and Rawlco Radio.  More information on RID is also available on the SGI website at www.sgi.sk.ca.

The Regina Police Service Traffic Unit has received a complaint regarding the manner in which a (vehicle description), bearing Saskatchewan license plate (plate info), was being operated.

Our records indicate that you are the registered owner of this vehicle.

The nature of the complaint was the manner in which this vehicle was operating on (date) at (time).  The vehicle was observed travelling on (block and street, city).  According to a witness, the vehicle was driving in an erratic manner.  The witness suspected the vehicle was being operated by an impaired driver.

This will not result in a mark against your driving record and it is intended only to make you aware of this situation.