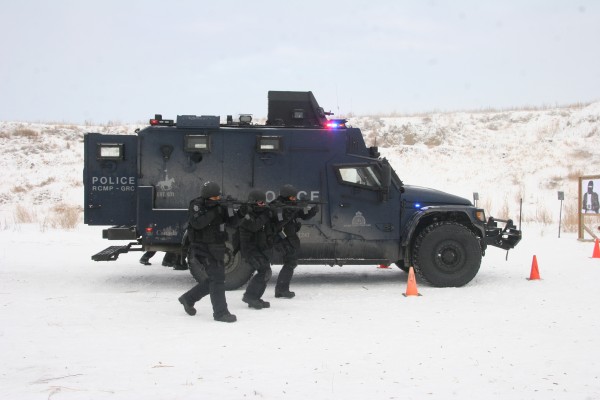 The Regina Police Service wishes to advise the public of training this week involving members of the Regina Police Service Special Weapons and Tactics Team and a Tactical Armoured Vehicle, or TAV, (owned by the RCMP) thanks to a loan agreement with the Royal Canadian Mounted Police “F” Division. This training also involves the assistance of Mr. Bob Gallegos, retired LAPD SWAT member and owner of a U-S based consulting company that specializes in training law enforcement officers.

The TAV, or Tactical Armoured Vehicle, is simply another tool that may be used by Regina Police Service SWAT members in situations that require a heightened tactical presence. An example of such a situation may be: a barricaded suspect, with a firearm, with a clear line of sight to an injured victim, who is exposed and unable to move to safety. In such a situation, police officers would need protection/cover in order to approach and rescue the injured person. Another scenario might involve an active shooter in a school where it is necessary for police to have cover, in order to approach and enter the building. Although both of the situations described here are rare, they have occurred in other jurisdictions in Canada and the U-S. Review of these events has demonstrated that scenario training, even for threats as rare as these, is desirable so that police tactical teams can respond quickly and effectively in the unlikely event that such an emergency should occur. All members of the RPS SWAT team are required to complete the TAV Operator Training Course, provided by the RCMP, in order to use the TAV in such situations.

Members of the Regina public may see the vehicle, which is a large, armoured truck, as the training takes place in and around Regina this week. Residents are assured that the presence of this vehicle does not indicate a real emergency and there is no live ammunition used in the training scenarios in the city. If a real incident should develop while these training exercises are in progress, the Regina Police Service would immediately notify the public.