You are here:
About PolicingCommunityVideo 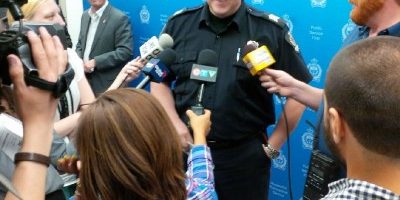 The Regina Police Association, the Regina Senior Officer’s Association, Out of Scope Employees and the Regina Board of Police Commissioners (collectively “stakeholders”) are pleased to announce that an agreement has been reached that results in a significant change to The Regina Police Pension Plan (Current Plan) effective July 1, 2014. This agreement is the product of years of hard work and the tremendous collaborative effort of the stakeholders. To support the changes to the pension plan, the Government of Saskatchewan passed amendments to The Pension Benefits Regulation, 1993 that will come into force on July 1, 2014. This success story demonstrates the willingness of all stakeholders to work together to find a sustainable and fair solution to issues similar to those currently threatening the viability of many pension plans in Canada, North America and even globally. The stakeholders are proud of the innovative solution they have achieved which will not only continue to secure retirement benefits for past, current and future members of the Regina Police Service, but will remain affordable to the City and taxpayers in the future. The stakeholders also want to recognize the efforts and support of the Government of Saskatchewan, Financial and Consumer Affairs Authority of Saskatchewan, the Pension and Disability Administration, the Administrative Board of the Plan and Aon Hewitt (the Plan Actuary). Background: For the past 30 years, the Current Plan has experienced significant funding challenges due mainly to:

A valuation of the Current Plan was prepared as at December 31, 2009 which identified a significant funding shortfall. Since the Current Plan is a defined benefit plan, this shortfall needed to be paid for over a period of no more than 15 years. The shortfall payments would have resulted in a significant increase in funding levels for both members and the Board of Police. The stakeholders agreed that the Current Plan was no longer sustainable or affordable in its current state and something more than a temporary fix needed to be done to protect both current and future employees and taxpayers. In June, 2010, a Working Group was formed with representation from all the Plan stakeholders: the Regina Police Association, the Regina Senior Officer’s Association, Out of Scope Employees and the Board of Police Commissioners. The purpose of the Working Group was to review the long-term sustainability of the Current Plan and get agreement from the stakeholders as to the necessary changes going forward. A variety of options were reviewed including, but not limited to, modifications to the Current Plan all the way to winding up the Current Plan and starting over again. The Working Group worked tirelessly over the past few years and are pleased to get agreement on the following solution effective July 1, 2014:

• The Current Plan will be closed to all members (current and new) effective July 1, 2014; • All benefits accrued prior to July 1, 2014 will remain unchanged; • The Board of Police Commissioners will assume the full responsibility for meeting the minimum funding requirements in respect to the Current Plan. Note that prior to July 1, 2014, any shortfalls revealed in the Current Plan were effectively shared 50/50 with members and the Board. The shortfall was estimated to be approximately $63M at December 31, 2012; • All current members and new members will join a new Target Benefit Plan called the “Target Retirement Income Plan (TRIP) for the Regina Police Service” for service accrued on or after July 1, 2014; • The TRIP will have the following features:

– fixed employer and member contribution rates of 8.5% of pay. Given members are currently contributing an average of 11.9%, members will realize higher net pay as a result of their pension contribution rate decreasing by approximately 3.4%; – similar lifetime and bridge benefits as Current Plan; – ad-hoc COLA; – early retirement provisions based on age and service (rule of 80); – pre-determined levers to address any future surpluses or deficits; and – rigorous risk management structure and benefits/funding policy.

Note that a Target Benefit Plan is a hybrid type of pension plan with the following characteristics:

• Fixed employee and employer contribution rates, • Lifetime pension formula, • Levers to adjust benefits upwards or downwards to deal with fluctuations in the market.

At the Regina Board of Police Commissioners meeting held February 18, 2014, the changes as outlined above were accepted by the Board. Since the establishment of the Working Group, all employees of the Regina Police Service have received newsletters and other internal communication to educate them on the increasing liabilities of the Current Plan, along with the proposed changes and the implications for current and future employees.

The Sounds/Sights of Scenario Training
February 2, 2022