You are here:
Video 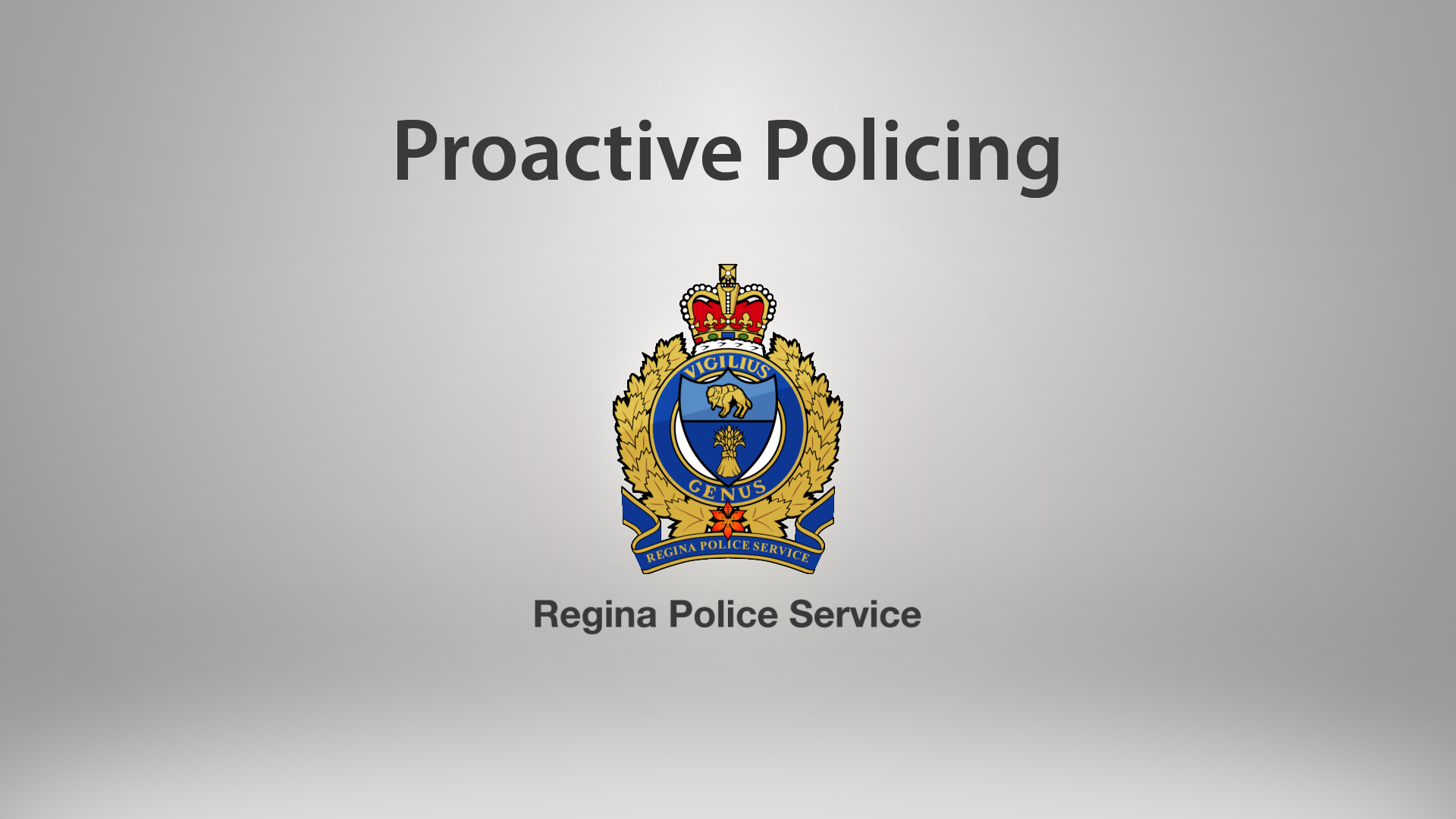 As the first quarter of 2015 has just passed, it’s important to provide you with an update into some of the ways in which we’re responding to community safety priorities.

You’ll recall that in 2014, the Community Perceptions Survey of the Regina Police Service was released.  We received a very favourable report card. The majority of all respondents held our Police Service in very high esteem relating to quality, service, professionalism, integrity, honesty and confidence. The survey also demonstrated that satisfaction and support for the Regina Police Service has been steadily increasing since 2005. But, residents also told us where we can do a better job. In 2014, the survey results clearly told us, that increased police visibility and presence were the most important service delivery improvements we could make.

In 2015, we entered into a new, four-year Strategic Plan that identifies increased police visibility and presence in neighbourhoods as a community priority. We want to tell you how we are striving to meet this important need and provide some context.

Policing is more than law enforcement.  Our demands are increasing in number and complexity. As we’ve previously talked about, in 2014, about 30% of our work relates to Criminal matters. The other time, police officers are involved in a range of responsibilities that in part, also include:

Searching for mental health patients who have left care facilities and, locating people under the Mental Health Act also requires significant police resources. Calls for service where mental health is a factor are increasing dramatically. In 2015, we’ve formed a partnership with the Regina Qu’Appelle Health Region where together, we are developing a new, combined, police and mental health response team. This team will be made up of a police officer and mental health crisis worker.

In Regina, the mental health response team will jointly respond to individuals experiencing a mental health crisis. The goals for the team will be to provide ongoing work to better align treatment and policing efforts; provide better overall support to those who are suffering from mental illness; and reduce the number of repeat calls for police service and repetitive visits to the emergency department.

We are committed to developing ongoing, innovative approaches to community safety through increased collaboration with other agencies. Although there are many past and on-going partnerships that we’re involved in, we’ll highlight another one that continues to be developed into 2015. This partnership reflects our ongoing and evolving commitment with other agencies to deliver the 11 and Under Initiative.

This initiative, otherwise known as 11UI, is aimed at supporting children under the age of 12, who are exhibiting behaviours that put them at risk for criminal involvement or are at increased risk for victimization. This collaborative work continues to evolve. This year, we are beginning to seek ways to expand that partnered support to youth over the age of 12.

In addition to our on-going and new partnerships with others to address community safety and well-being, we are expanding our proactive policing initiatives by increasing police visibility throughout the city.

Police services throughout Canada, including the Regina Police, are being increasingly challenged to become more efficient in the delivery of services, and to find improvements through new and effective community safety models.

Policing demands are increasing in number and complexity. To respond to the need for increased police visibility and presence throughout our city, we are building effective, efficient and economical strategies through innovative analytical improvements, technology and evidence-based practices.

Our approach to proactive policing is inspired by the collection of research, insights and work of Dr. Irvin Waller, an internationally recognized criminologist who has guided legislators, police leaders and other authorities in developing crime reduction policies worldwide. We also work closely with and value the professional relationships we share on an on-going basis with the University of Regina. Our proactive policing approaches are also used by other agencies, in other jurisdictions and provinces. Lastly, we’ve had direct assistance from Dr. Peter Park and the work he and his colleagues from the University of Saskatchewan are doing relating to Data-Driven Approaches to Crime and Traffic Safety.

Leveraging technology and building analytical capacity was necessary to allow us to make more of a measurable shift towards increasing the frequency of proactive policing, and providing added visibility in needed areas throughout the city. Specialized analysts are providing analytical support to inform our proactive work. Leveraging data for enhanced situational awareness and more efficient operational decisions is critical.

In 2014, the Regina Police Service developed an analytical platform that links to our existing data management systems and allows us to more objectively identify where focused and visible policing efforts should occur in order to reduce crime and calls for service, and where added safety appears necessary. We are in the early stages of this new approach. We began expanding the use of this technology in early 2015.

In the first four months of this year, we were able to dedicate a highly visible presence throughout many Regina Neighbourhoods. Equipped with ‘hot spot’ maps, officers throughout the Service were deployed into areas where crime and other incidents were increasing. Their increased presence is intended as a deterrent effect and also sees them interacting with residents more often. Extra officers assigned to patrol these areas are conducting more street checks, traffic stops and reaching out to residents. On recent high-visibility patrols in areas experiencing increased rates of property crime, our officers have been noticing garage doors, wide-open, late at night. They are stopping in and contacting the homeowners to remind them to lock their doors.

Recently, our officers have also been out at places like community rinks, leisure centres, and shopping centres where high rates of theft from autos were occurring to deter thieves and remind people to remove valuables from their vehicles and not leave them in plain sight.

We are striving to be more visible in identified priority areas whenever possible but it does not mean that individuals can relax their efforts to prevent break-ins and thefts. We are also providing regular public information. Follow our hash tag # lock-it-or-lose-it.

Recently, a group of our officers where engaged in a highly visible proactive policing initiative, in a specific area where we were experiencing increased crime and calls for service. As a result of this focused work, those officers likely saved the lives of and prevented serious injury to a number of people who were fighting out on the street. The officers, proactively assigned to the area, quickly intervened with the groups and recovered weapons that included an axe, knife, baseball bats, a 2X4, bottles and a firearm. Proactive policing is preventative policing intended to reduce and prevent continued or escalating criminal conduct and serious offences from being committed.

When developing proactive policing approaches, we focus on data-driven information but view data as only enhancing our understanding of our working environment. Additional insight from our police officers, other employees, and input from within our communities remains very important.

As part of a combination of deployment strategies in identified priority areas, a balanced focus is placed on actively managing known offenders in an effort to deter and prevent further offences from being committed. Focus and time is also spent on those who are at risk of being victimized and those who are repeatedly victimized. Effectively reducing victimization often relies upon our partnerships with others. Our leadership in mobilizing the community to enhance safety and well-being is vital.

Proactive policing initiatives often include police officers engaging in both formal and informal interactions. In the coming weeks, we’ll be sending out additional public information about police street checks and the roles, responsibilities and obligations of the police along with requests, legal obligations and suggestions for citizens to further understand these interactions.

When Regina Police Service officers engage in ‘street checks’, they are guided as follows:

We know that reducing crime and improving community safety must be done by building upon our positive reputation and past successes while broadening our focus, support and responses to people’s fear and perceptions of crime and safety. Making improvements includes responding to where residents tell us those improvements are needed.

We’re listening to our communities. Their requests for increased police visibility and presence in their neighbourhoods are supported by research. When this approach is combined with other strategies, focused police presence can lead to reductions in crime and other incidents.

As an early start within our new strategic plan, we’re increasing our visible presence throughout the city where we’ve been experiencing elevated crime levels and other problems. We know you’re noticing. Many of you have told us that you’re seeing more of us.

As we head into the summer, we’ll be working hard to maintain that presence not only in police vehicles, but on bikes and on foot, throughout our neighbourhoods and parks.