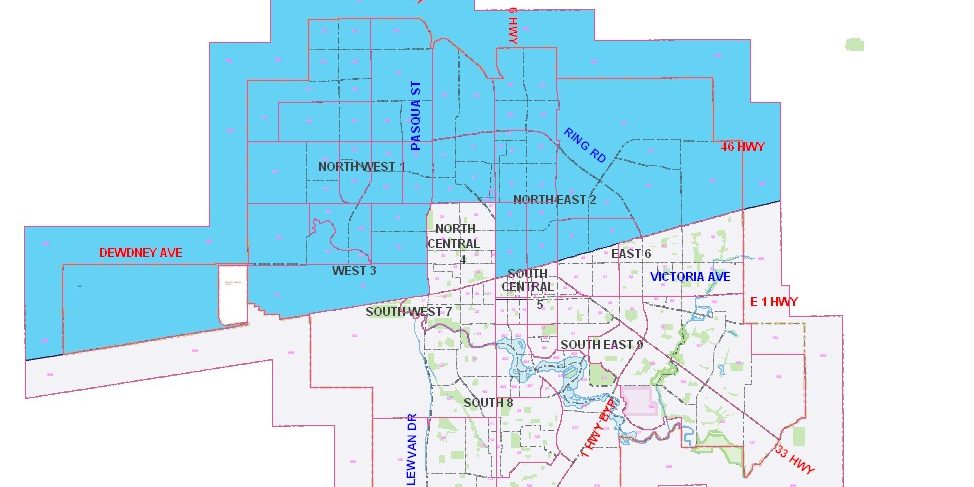 The North District includes the area within the City limits north of the Canadian Pacific main railway line, with the exception of the North Central Community. This geographic area also includes the Paul Dojack Youth Center. This District is divided into three zones; the Northwest, the Northeast and the West zone. These zones are further sub-divided into smaller atoms. Officers assigned to the North District are assigned specific zones and atoms in order to enhance geographic ownership and provide more effective responses to calls for service and community concerns.

The Community Services Division North District is currently overseen by one Inspector and one Staff Sergeant who are responsible for North District members within four patrol shifts, the Traffic Safety Unit (TSU), a Crime Stoppers/Community Programs officer, an Early Intervention and Referral Program officer and a School Engagement Officer[1].

The Regina Police Service Tactical Analysts report on crime trends and collect data. This information is reported daily and is used to identify hot spots of crime in the city. This information is critical and provides the District S/Sgt.’s with a valuable opportunity to effectively direct resources and develop timely strategies. The S/Sgt provides front-line officers with Proactive Policing hot spots and targets based on this information.  The Regina Police Service produces a community crime report through our computer (IEIS) system. This report allows us to compare reported crimes against property and crimes against person for the North District. It also allows us to compare North District reported crimes to the remainder of the city.

Property crime in the North District in 2017 accounted for 33.4% of all reported property crime in the City of Regina; that is an increase of about 0.7 percent from 2016.  Of the three zones in the North District, the Northwest zone reported the highest number of events, accounting for 46.4% of all violations in the district. The Northeast zone reported 36.9% of all violations in the district, while the West zone had the fewest number of reported violations at 16.7%.

[1] School Engagement Officer is a position funded by the School Boards on a two year trial.  Position was implemented January 2015 and ends in September of 2017.

We saw decreases in theft of auto, theft from auto and mischiefs in 2017, however there was an increase in in break and enter property offences in the North District.

In 2017, the TSU once again partnered with the City of Regina on several traffic projects, including the continuation of the “Overdrive Program” along with the “Intersection Enforcement Program”. These traffic initiatives focused enforcement efforts towards high volume traffic areas, high collision intersections, and areas around social drinking establishments.

Provincially, the TSU contributed to the Selective Traffic Enforcement Program (S.T.E.P.) by sending members to various locations throughout the province. TSU also provided resources to the Driving Without Impairment (DWI) program, which is a joint program with SGI.  TSU officers provided 24, 2- hour presentations as part of the DWI program in 2017.

2017 was the second year of Automated Speed Enforcement (ASE) in the City of Regina. SGI began the pilot project in March of 2015. As of December 2017 there are three automated speed enforcement cameras that move to various locations in the City.  There are two in select school zones and one on the Ring Road.  We have noticed a change in driver behaviour in relation to speeds especially on Ring Road.  In 2015, there were over 27000 tickets issued (over a ten month period).  The number of ASE tickets issued is decreasing; in 2016 numbers were down -42% from 2015, in 2017 numbers were down from -45% from 2015.

Throughout 2017, members of our TSU continued to focus on impaired drivers. There were  570 incidents of impaired driving investigated by the RPS which resulted in numerous Criminal Code driving charges.

Crime Stoppers in the later portion of the year started working in partnership with the School Resource Officers and both School Divisions within Regina on the Leaders Creating Future Leaders Program. This initiative gives 25 children the opportunity to hear from different community leaders on a monthly basis.

TRiP is a three-component, multi-sector collaborative risk-driven initiative designed to improve community safety and well-being in Regina, Saskatchewan. These components include the 11 and Under Initiative (11UI), the twelve&up Initiative (twelve&up), and a Hub.

TRiP is a shared commitment by multiple human service agencies including Ministry of Social Services, Ministry of Justice, Saskatchewan Health Authority, Regina Public and Catholic School Boards, and the Regina Police Service. By focusing on coordinated service support, reduction of barriers to pro-social activities, and school engagement, TRiP aims to generate risk reduction, and ultimately reduced vulnerability of children and their families through improved communication and collaboration among service providers.

In 2017, the TRiP program received 66 referrals for 11UI and 47 for twelve&up for a total of 113 referrals. As of December 31st, TRiP had 77 children active in the programs. In 2017, TRiP held 491 case conferences with families. Case conferences are held every 4 to 8 weeks as required based on an identified level of risk. In 2017, the TRiP School Engagement Officer (SEO) was involved with 46 clients, for varying lengths of time and in different capacities. A large part of the overall SEO case management plan is spent engaging with and creating incentives for children to stay in and remain actively involved in school. The SEO position was discontinued at the end of August due to lack of funding.

The following are a number of highlights from 2017:

An independent evaluator conducted a 24-month evaluation of the TRiP program. We received the results in October 2017 which indicated that there was a moderate to strong reduction of aggregate vulnerability in 82% of the children and youth that TRiP worked with over that time period. The key findings were: