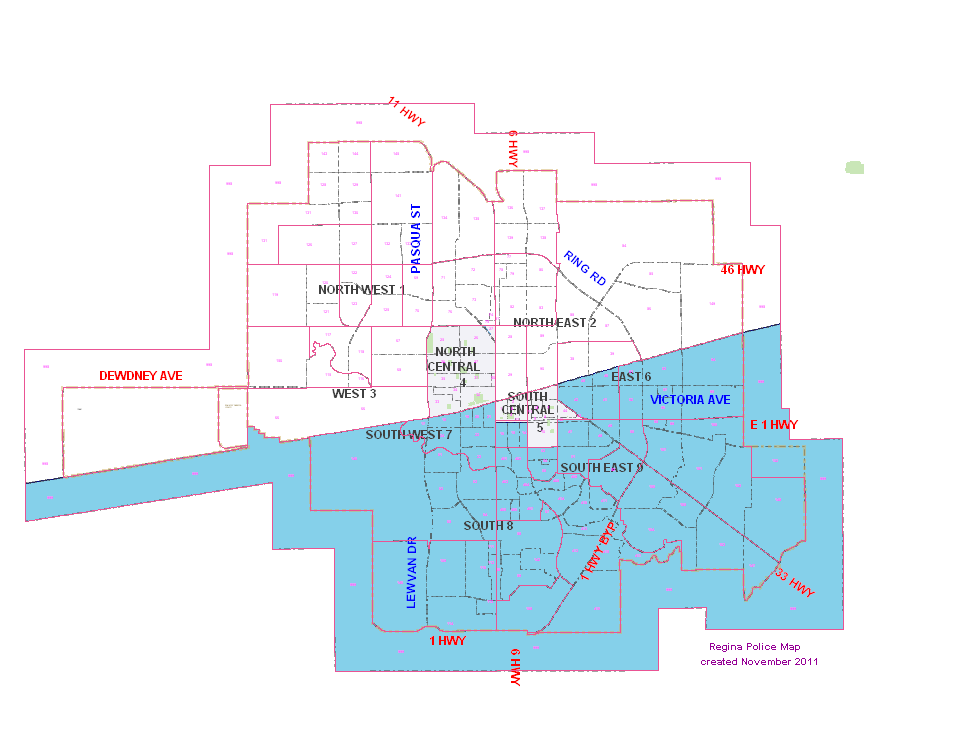 The Community Service Division South District encompasses the area south of Victoria Avenue., east of Winnipeg Street and west of Albert Street, to the City limits. This area is equivalent to 166 square kilometers.  The patrol district is broken down into 4 main zones those being South, Southeast, Southwest, and East. The geographical area that these patrol zones encompass continues to grow in the south with the Harbour Landing development and southeast with the Creeks, Creek Side, and the Greens on Gardiner developments. The South District is the fastest growing area in the city.

These zones are further sub-divided into smaller atoms. Officers assigned to the South District are assigned specific zones and atoms in order to enhance geographic ownership and provide a more effective response to calls for service and community concerns.

The Community Services Division South District is overseen by one Inspector and one Staff Sergeant who are responsible for the oversight of South District members within four patrol shifts, the School Resource Program, the University Liaison Officer, the Investigative Response Unit (IRU) and the Police and Crisis Team (PACT).

The Regina Police Service has two Tactical Analysts who report on crime trends and collect data. This information is reported daily and is used to identify hot spots of crime in the City. This information is critical and provides the District S/Sgt.’s with the opportunity to effectively direct resources and develop timely strategies. The Regina Police Service produces a community crime report through our computer (IEIS) system.  This report allows us to compare reported crimes against person and crimes against property for the South District.  It also allows us to compare South District reported crimes to the remainder of the city.

In 2017, the South District experienced decreases in Break and Enter, Theft from Auto, Theft of Auto and Mischief offences compared to 2016.

The South District saw a decrease in Assault and Robbery offences in 2017 compared to 2016.

In 2017 the Community Service Centre consisted of two alternate shifts. Each shift was comprised of six Constables, a Corporal and a Sergeant.

Central District Community Service Centre officers play a unique and diverse role in the Central District. These officers perform regular police duties (such as Patrol) but much of their responsibilities are focused on responding to current and emerging crime trends and implementing effective strategies to reduce Central District crime and victimization. Service Centre members participate in a number of community outreach programs and collaborate with community stakeholders to respond and resolve community concerns. They participate in high visibility police projects and proactive police functions within the Central District.  Along with walking the beat and patrolling on bicycles, in 2017 they were also responsible for operating the North Central Community Service Center office located at 1264 Athol Street.  This community office allowed the public to report incidents to police without having to travel outside of the North Central community. As of 2018 this office has officially moved to the mâmawêyatitân centre and houses the newly formed RPS Community Engagement Unit

In addition, these officers worked with over 36 community partners and attended over 100 community events including the FNUC Pow Wow, the Queen City Exhibition, Coffee with a Cop, Community Cop Day, and the celebration of National Aboriginal Day. They also developed responses and oversaw numerous problem solving initiatives aimed at reducing the number of police involved incidents (property crime, crimes against the person, prostitution, arsons, substandard housing in North Central, and incidents involving intoxicated persons).

In 2017, Service Centre members continued to take the lead in the Central District Crime Reduction Strategy (CDCRS). Developed in 2014 and implemented in 2015, the CDCRS continues to focus on improving community safety by reducing the levels and impacts of crime in Regina’s core neighborhoods, including our city’s downtown area.

There are two Central District beat officers on each of the four patrol shifts for a total of eight officers. The Central District beat officers continue to work closely with a number of downtown partners including the Regina Downtown Business Improvement District (RBID), the Cornwall Center, and the Regina Public Library.  Officers met with RDBID staff regularly and attended a number of RDBID events including Cinema under the Stars and the Farmers Market. Beat officers participated in high visibility police work and proactive activities and conducted a large percentage of their work on foot or bicycles.

Sound and healthy relationships with the North Central Community, the South Central Community, and our downtown business district are critical in building and maintaining community well-being and a strong sense of safety. The Central District takes pride in the efforts that are made to organize and partake in Central District events such as Community Cop Day, Showcase, and many others.  In 2017 officers assigned to the Central District reached out to organizations such as Street Culture, Carmichael Outreach, and All Nations Hope. They attended the FNUC Pow Wow at the Brandt Centre and the annual Tamra Keepness BBQ and were responsive to protests and demonstrations in the District. The Regina Police Service, including the members working the Central District and our community partners, remain committed to improving public safety within these communities