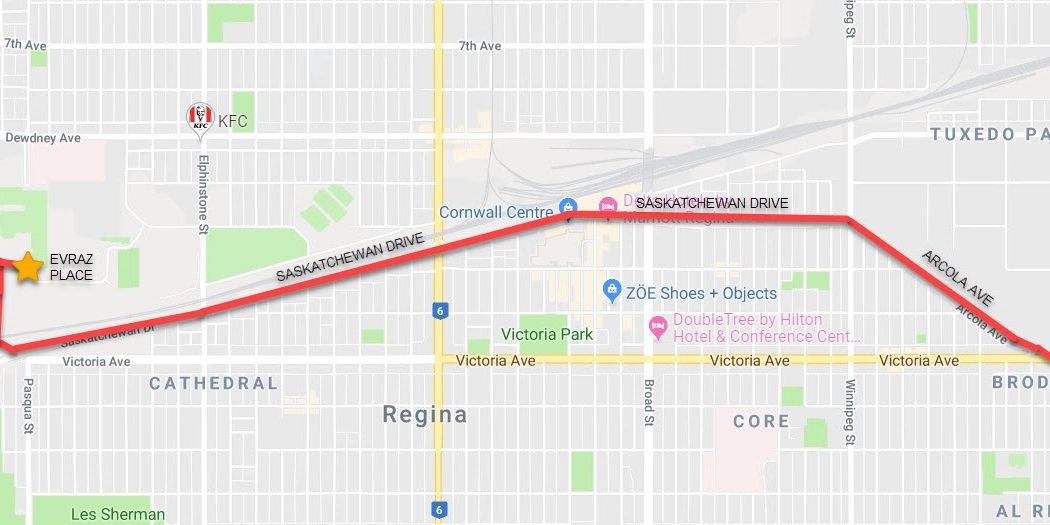 As we get closer to April 4th, the number of vehicles anticipated for the Regina Rally Against the Carbon Tax is growing.  The Regina Police Service continues to communicate and work with organizers of the convoy and rally, scheduled for this Thursday, April 4th, in Regina.  The convoy is expected to pass through the city just after 10:30 a.m., April 4, 2019.  It is difficult to predict the exact length of time it will take for the convoy to reach Evraz Place, since the number of participants is still growing, but as of this afternoon, we have been told to expect as many as 500 vehicles.

At this time, we anticipate having the convoy vehicles at Evraz Place by 11:30 a.m.  This depends, of course, on the cooperation of all parties as the convoy makes its way through downtown Regina.

At this time, we have been advised the rally programme (speakers) will begin at 2:00 p.m.

We anticipate orderly, gradual dispersal of convoy vehicles will begin around 3:30 p.m.

The description of the route is as follows:

The rally will follow at Queensbury Centre at 2:00 p.m.  Dispersal of vehicles, after the rally, will happen more gradually, with most traffic likely to head south on Lewvan Drive.

Members of the Regina Police Service Traffic Safety Unit, as well as other uniformed members, will be positioned along the convoy route, especially at major intersections to facilitate the flow of traffic.  All motorists, pedestrians and cyclists are asked to follow the direction of officers, and exercise patience and cooperation.

Please treat this as if it were any other large gathering being held in our city.  Expect traffic delays, much as you would experience if we were holding a large-scale sporting event, major concert or large parade.

The role of the Regina Police Service is to ensure safety for all users of our roadways: motorists, pedestrians, cyclists, etc., while also ensuring that everyone’s rights are respected, including the rights of the protestors to protest the carbon tax.  This has been organized as a lawful protest, with a permit granted for the “parade” of vehicles.  We acknowledge that there will be traffic delays, but they will be for a short-term.  Be patient and follow the directions of police officers.  The Regina Police Service thanks the public for its cooperation and understanding.

Suspicious Vehicle Investigation Leads to Recovery of Firearm
May 10, 2022