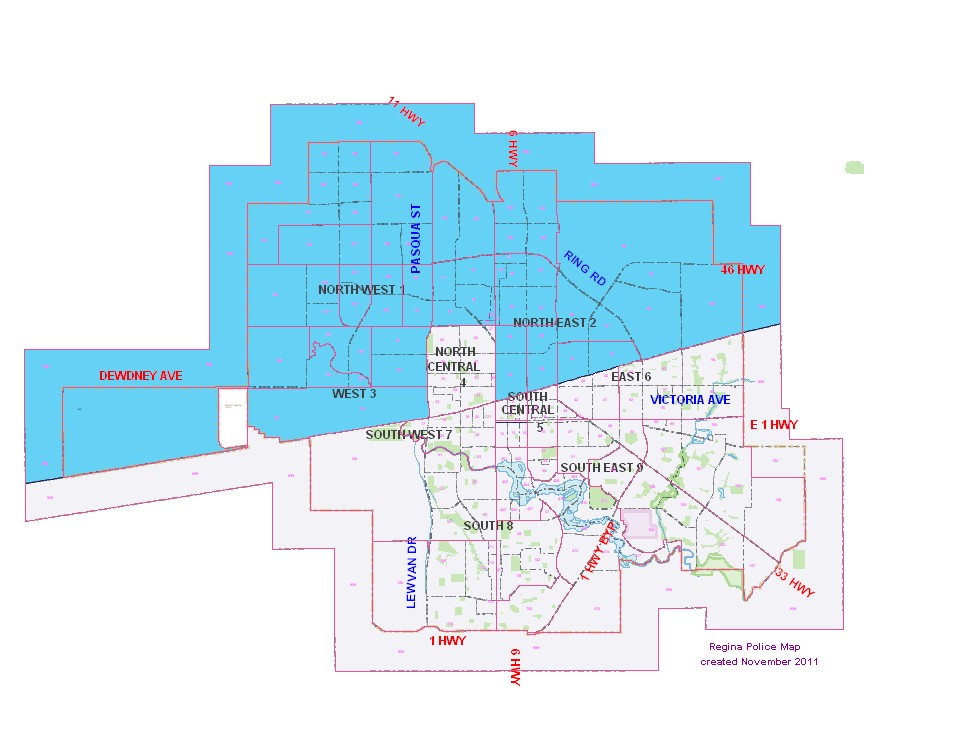 The North District includes the area within the City limits north of the Canadian Pacific main railway line, with the exception of the North Central Community. This geographic area also includes the Paul Dojack Youth Centre. This District is divided into three zones; the Northwest, the Northeast and the West zone. These zones are further sub-divided into smaller atoms. Officers assigned to the North District are assigned specific zones and atoms in order to enhance geographic ownership and provide more effective responses to calls for service and community concerns.

The Regina Police Service Tactical Analysts report on crime trends and collect data. This information is reported daily and is used to identify hot spots of crime in the city. This information is critical and provides the District S/Sgt.’s with a valuable opportunity to effectively direct resources and develop timely strategies. The S/Sgt. provides front-line officers with Proactive Policing hot spots and targets based on this information. The Regina Police Service produces a community crime report through our records management (IEIS) system. This report allows us to compare reported crimes against property and crimes against person for the North District. It also allows us to compare North District reported crimes to the remainder of the city.

Property crime in the North District in 2018 accounted for 30.7% of all reported property crime in the City of Regina; that is a decrease of about 2.7 percent from 2017. Of the three zones in the North District, the Northwest zone reported the highest number of events, accounting for 47.6% of all violations in the district. The Northeast zone reported 36.8% of all violations in the district, while the West zone had the fewest number of reported violations at 15.3%.

In 2018, the TSU once again partnered with the City of Regina on several traffic projects, including the continuation of the “Overdrive Program” along with the “Intersection Enforcement Program”. All of these traffic initiatives focused enforcement efforts towards high volume traffic areas, high collision intersections, and areas around social drinking establishments.

Provincially, the TSU contributed to the Selective Traffic Enforcement Program (S.T.E.P.) by sending members to various locations throughout the province. TSU continued with “High Visibility Projects” throughout the year again focusing on high traffic volume in known drinking establishments. TSU also provided resources to the Driving Without Impairment (DWI) program, which is a joint program with Saskatchewan Government Insurance (SGI). TSU officers provided 24, 2- hour presentations as part of the DWI program in 2018.

2018 was the third year of Automated Speed Enforcement (ASE) in the City of Regina. There are three automated speed enforcement cameras that move to various locations in the City. There are two in select school zones and one on the Ring Road. In 2018 the number of ASE tickets issued increased 23% from 2017. This was the first increase since the program was started in 2015.

The Regina CTSS unit started in March of 2018, staffed with 4 Constables and a Sergeant. In October of 2018, 5 more staff were added, which included a Corporal and 4 additional Constables. These 5 additional members were fully operational November 2018.

The Regina CTSS participated in several traffic projects throughout the southern district of the province;
▪ May 2018 – Swift Current community; an increase in the amount of vehicle traffic was anticipated for this event, in previous years the RCMP had experienced incidents of impaired driving.
▪ August 2018 –A car show / drag race competition at the Swift Current Airport where it was anticipated a large number of modified vehicles would be in the City.
▪ July 2018 – Regina CTSS hosted members from various RCMP detachments, Moose Jaw Police Service CTSS, Saskatchewan Highway Patrol, and Weyburn Police Service CTSS. Numerous locations within the City were targeted.
▪ September 2018 – Provincial Project on Highway #1 near the Alberta border – checkstops
▪ December 2018 – Assisted Weyburn Police Service CTSS unit with other Municipal agencies and RCMP detachments doing multi-location check-stops in Weyburn.

Crime Stoppers continued working in partnership with the School Resource Officers and both School Divisions within Regina on the Leaders Creating Future Leaders Program. This initiative gives 25 children the opportunity to hear from different community leaders on a monthly basis.