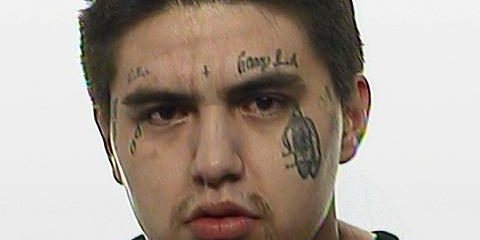 The Regina Police Service is asking for help from the public in locating a male wanted in connection with an assault.

On February 21, 2020 at approximately 4:10 a.m. police were dispatched to a weapons offence involving a bladed weapon, located at an apartment residence on the 1400 block of Rae Street.

Twenty year-old Warren CRANE, of Regina is described as male, 6’0” tall, approximately 160 lbs, medium build, light complexion, with medium-length, straight brown hair, and brown eyes. Noticeable tattoos include multiple facial tattoos including an upside down cross on his mid brow, “Gang Life” on his left brow, “NSK” vertically on his right temple, two tear drops under his right eye and another under his left lower lip, and two feathers bound together under his left eye. CRANE has a tattoo of the words “Sex Money Murder” on his left forearm, “Loyalty” on his right forearm, “City” on his left hand, B-O-Y-S across his fingers on his left hand, “Mean” on his right hand and C-O-K-E across his fingers on his right hand, and the North Carolina Tar Heels “NC” silhouette logo on the right side of his neck.

Male Charged with Robbery and Weapon Offences
May 10, 2022