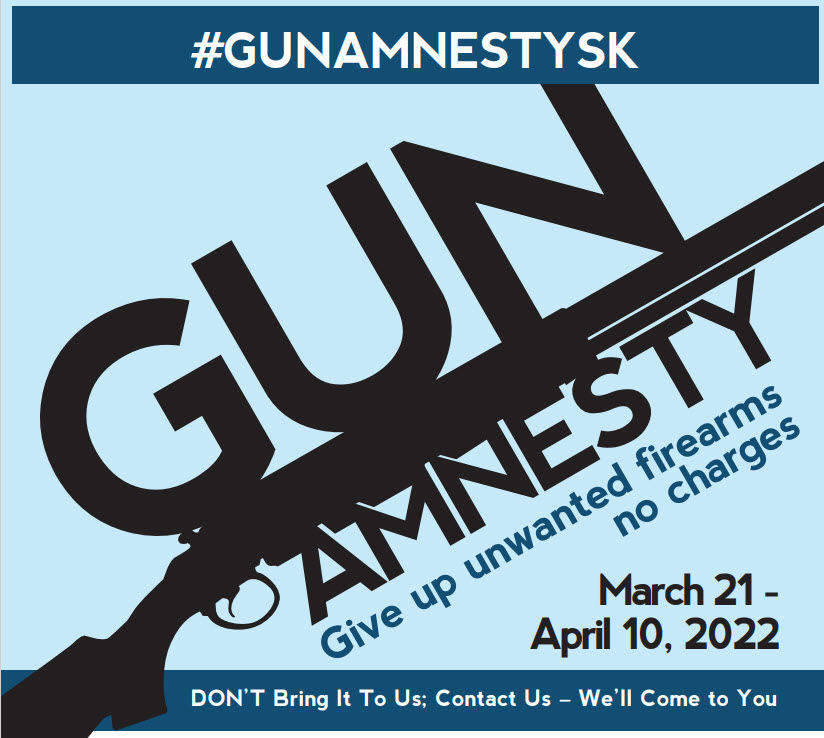 The Regina Police Service is joining other municipal police, the RCMP and the Ministry of Environment in the 2022 Firearm Amnesty Program, from today: March 21st, to April 10, 2022. The program, sponsored by the Saskatchewan Association of Chiefs of Police (SACP), offers a proactive approach to the issue of illegal possession and criminal use of firearms in Saskatchewan.

The SACP Firearm Amnesty recognizes that our province has a long history and tradition of hunting, agricultural production, and recreational marksmanship. Firearms are a necessary tool in these vocations and pursuits. The SACP distinguishes that legal, safe and responsible firearm ownership is the practice of most gun-owners in this province. The SACP Firearm Amnesty does not wish to have an adverse effect on responsible firearms owners. Instead, the SACP Firearm Amnesty is designed to lower the risk of violent offences involving firearms, by safely collecting and disposing of unwanted firearms that may, otherwise, fall into the hands of criminals through residential break-ins or accidental loss. Reducing the numbers of these firearms in our cities, towns, and rural communities will have a positive impact on public safety. An example of an unwanted firearm would be a firearm inherited as part of an estate, but no longer wanted by the surviving relative. The Amnesty also extends to replica or imitation firearms, and any unwanted ammunition or parts of firearms.

Between March 21st and April 10th, 2022, residents of Regina are encouraged to contact the Regina Police Service, at 306-777-6500, to arrange to surrender unwanted firearms, replica firearms, and/or ammunition. NOTE: Members of the public must not transport firearms to RPS Headquarters. Improper transportation of firearms presents a safety risk and can result in potential criminal charges. By pre-arrangement, police officers will pick up unwanted firearms from the homes of residents who wish to surrender them. During the period of the SACP Firearm Amnesty, police will not pursue any charges in relation to the unauthorized possession of firearms surrendered as part of this initiative. Surrendered firearms will be checked by police to see if they are involved in any ongoing investigations. Firearms will then be destroyed.

In addition to the RCMP and the Ministry of the Environment, the following municipal police services will be participating; Saskatoon, Regina, Prince Albert, Moose Jaw, Estevan, Weyburn, File Hills First Nations, and Wilton. Local details regarding arrangements for drop-off and pick-up will be made public in each community.

The event is finished.