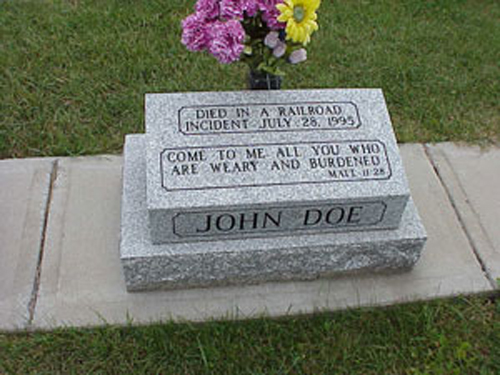 The verse on the modest, granite headstone at Regina’s Riverside Cemetery reads, “Come to me all you who are weary and burdened – Matt. 11:28”. The name inscribed on the face of the marker is “John Doe”. The manner of his passing from this life is known; he died on a railway track west of Regina on July 28, 1995. Ten years later, his identity eludes all who’ve tried to confirm it. Why he chose to end his life may never be known. At a time when the public is so aware of the issue of missing persons, it’s puzzling that there can be a “found” person, here in Regina, who must be missing from somewhere. Somewhere in this country or the U.S., is there a family wondering what’s become of their son or brother?

On Friday, July 28th, 1995, at about 3:40 p.m., police were dispatched to the Canadian Pacific Railway crossing at 13th Avenue and Courtney Street for a report of a fatality. Police interviewed two CP rail employees who had just witnessed a young man come from the ditch on the south side of the tracks and position himself in the path of an eastbound, four-locomotive train hauling 104 boxcars. The crew was unable to stop the train, which was traveling approximately 65-70 kilometres per hour as it approached the crossing. The railway traffic control arm was down and the red warning lights were functioning. The victim was killed instantly by the impact. The police investigation that followed left no doubt that the man’s death was a suicide, but police now faced a new challenge: who was this man? 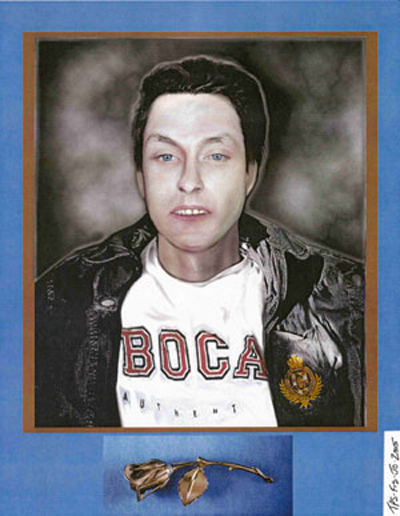 The victim was described as male, Caucasian, about 20 to 30 years old, cleanshaven, with short, medium-brown hair and blue eyes, about 5’ 9” tall, weighing about 140-160 pounds. He was wearing a black denim button shirt with a gold“crown” logo displayed on the left front pocket. Under this shirt the victim wore a white t-shirt with the words “Boca Authentic” on the front. He also wore faded blue  jeans, white socks and a pair of size 12 and 1/2 (although his actual foot size was 9 and 3/4), blue and white Reebok runners. He carried no personal identification and a search of a knapsack he’d had in his possession, revealed some clothing and personal items, but virtually nothing to help investigators determine his identity. In his pocket, there was a silver brooch, shaped like a rose, sometimes referred to as, “The Christmas Rose”.

The investigation that followed included searching the victim’s fingerprints: locally, across Canada, the U-S and internationally. The result was negative, indicating the victim had never been fingerprinted. The deceased had no tattoos, surgical scars or unusual characteristics that might have helped to identify him. No missing persons matching his description were reported locally. Extensive x-rays and numerous photographs were taken, dental charts made and DNA samples gathered in the hope that these would help confirm the victim’s identity.

Information, including a composite drawing, created by the Regina Leader Post (Gail Duesterbeck), was released to the media. The investigation and subsequent media coverage produced queries from other jurisdictions in Canada and the U-S, but none of the people missing from those centres matched Regina’s unknown male victim.“There isn’t a person who dies in this province that isn’t a concern of ours,” says Kent Stewart, Chief Coroner of the Province of Saskatchewan. “We are committed to completing a thorough investigation which includes answering the critical question of, who died? Our job is not done.”

John Doe is buried in the Southeast portion of Regina’s Riverside Cemetery. A rectangular granite headstone marks the grave, the gift of a woman now living in Turner Valley, Alberta. Ms. Barbara Beck has also agreed to allow the Regina Police Service to use her name. Ms. Beck was working in Regina at the time of John Doe’s death and, upon hearing that he was to be buried with no one claiming his  body, bought the headstone for his grave.

The Regina Police Service Cold Case Unit continues to work in conjunction with the Coroner’s Officer on solving this mystery.